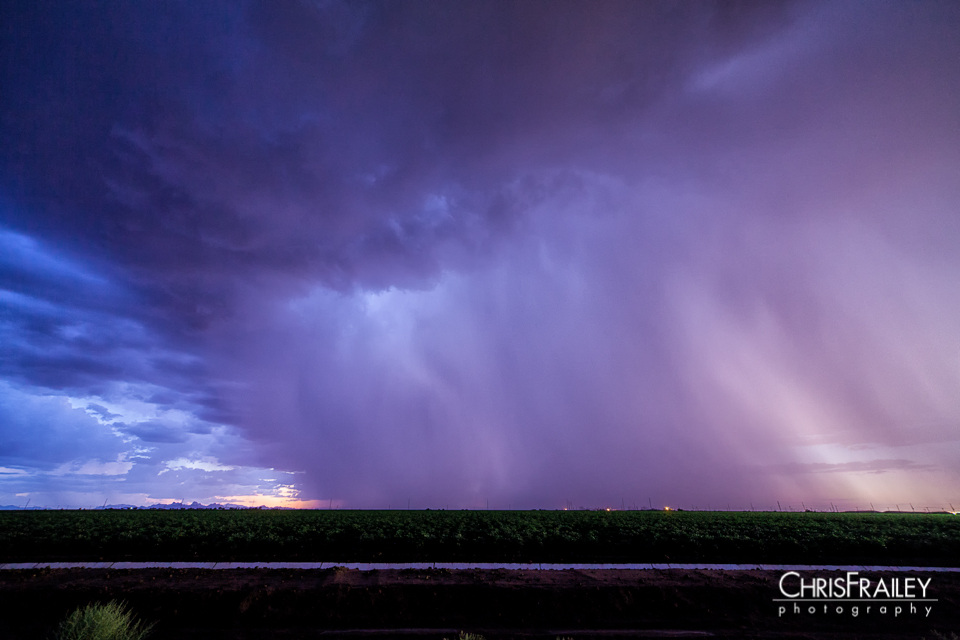 “Purple Rain, Purple Rain” those words rang into my ears from the song by Prince when I saw this amazing rain shaft just outside of Eloy, Arizona.

Dancing in the Purple Rain

I made a quick trip south on Tuesday of this week to chase a small set of storm cells that might end up being the last of this year’s monsoon. When they first popped up on radar I wasn’t sure if it would be worth the drive down as conditions were not favorable to really sustain much storm activity. However, I knew several of the local meteorologists were predicting the monsoon could be winding down, so given that I headed out the door with camera gear in hand.

Eloy is only about 45 minute drive from my house so I figured it was worth the gamble. As I approached the cell I was quickly met by blowing rain, the natural enemy of the storm chasing photographer. A quick check of the radar showed me that if I continued a little further south I had a good chance of driving out of the rain. Pushing on I pulled over on one of the exits and set up to time lapse this gorgeous “Purple Rain”. As fate would have it this was a fast moving cell that would quickly overtake my position. I did not have time to capture enough frames for the time lapse but I did get several nice stills to choose from for a print. Timing didn’t work out for me that night due to lack of exits further south to pull off on which forced me to stay further north than I had wanted. If I could have gotten there about 15 minutes earlier I may have been able to get the time lapse. Win some, lose some.

Purple Rain was a popular song when I was in high school. I remember hearing it on the radio constantly and of course there was the movie that accompanied it.